In an 8 to 1 vote the Portland City Council approved the $2.8 million tax break requested by the law firm of Pierce Atwood.  The company plans on moving from its current offices at One Monument Square to the waterfront.

The new location will be the five-story Cumberland Cold Storage building on Cumberland Wharf, between Union Wharf and the Portland Fish Pier.  It is among the oldest and tallest building on the waterfront – but is in need of extensive renovation. 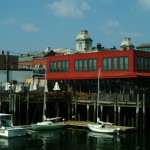 Without a tax break, the $12 million renovation project would generate more than $200,000 in tax revenue for the city annually. Because of the council action Monday, however, the city will receive about half that amount annually for the next 20 years. After that, the building’s owners will pay full taxes.

In the end, Portland will get $2.7 million in new tax revenue during the 20-year period, and the building’s owner, Waterfront Maine, will get a tax break worth $2.8 million.

Waterfront zoning is an important issue for Portland, especially as the city looks for way to improve business conditions yet still preserve its link to its maritime past.  The council is expected to take up this issue in earnest later this summer.  It is critical that they do, and focus on what is best for the city’s future.