Remember the $100 million revitalization plan for Thompson’s Point?  Well, progress is being made, albeit in small steps.

Within the last week the site’s developer, Forefront Partners, announced that it has finalized an agreement to relocate the Suburban Propane. The deal will allow for a 3,500-seat arena and event center and a parking garage to be built next to the train tracks, making it easier for passengers entering Portland via the Amtrak Downeaster to disembark and directly enter the facility. 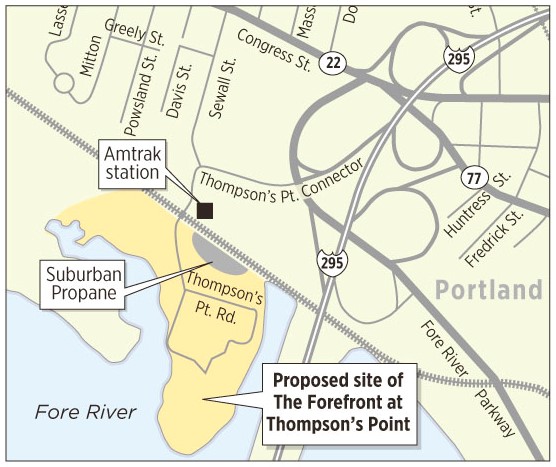 In exchange for the land, Forefront Partners will buy three acres of city-owned land on Riverside Street for about $300,000 and build Suburban Propane a new facility there. The goal is to relocate Suburban within 18 months of the city making a final decision.

Since the project was unveiled in 2011, the actual development plan has been constantly evolving, including the preservation of two brick buildings that were originally slated for demolition.  One is scheduled to be the home of the Circus of Conservatory of American and the other to be a “creative cluster”.

The Maine Red Claws, the D-league affiliate of the Boston Celtics, have announced that they will make Thompson’s Point their home.