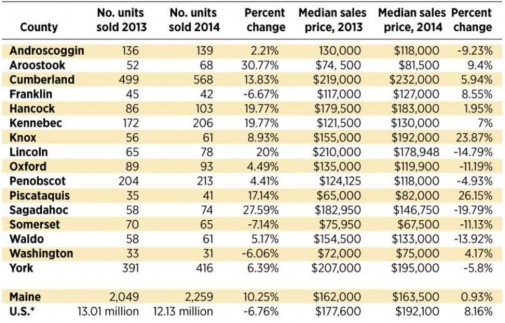 Comparing the first quarter of 2014 to 2013, the median price is up marginally – less than 1%.  However, there are great fluctuations by county.  Six countries recorded declining prices in the first quarter, including York County (surprisingly) at 5.8%.  Cumberland County, which represents 25% of all the State’s homes sales, recorded a healthy quarterly price increase over 2013 of 5.9%.  Unit sales were also up 13.8%, reflecting an overall strong market.

Nationally, prices have been increasing, while sales volume has been declining – exactly the opposite of what we have been experiencing in Maine.