Ocean Gateway Garage and a nearby vacant lot have been sold, more than eight years after city officials and developers celebrated the garage’s groundbreaking as the start of a project expected to transform Portland’s eastern waterfront.

The project, however, never materialized beyond the garage – but now another plan is being developed to build a hotel and condos on the property.  This announcement follows less than 30 days after the overwhelming defeat of the view restriction referendum that would have severely limited development in the city. 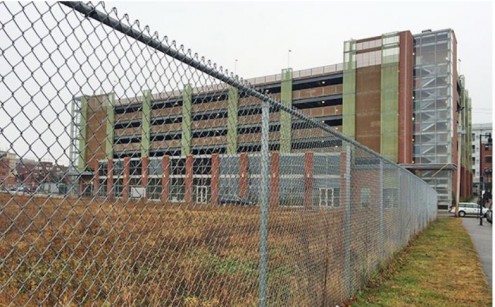 Portland Norwich Group purchased the 1.3 acre parcel (abutting the Grand Truck building) and garage for $20 million and subsequently sold the garage for $13.1 million to a local investor.  Development plans include construction of 150-room AC Hotel by Marriott with 16 condominiums and roughly 4,000 square feet of restaurant or retail space on half of the vacant lot. The other side of the lot (on India Street) will be used for future development.

Interestingly, the initial development eight years ago was to include 100 condos.

Portland Norwich Group is a subsidiary of Norwich Partners, which has offices in Lebanon, NH, and Sanibel, FL.

The Planning Board must still hold a public hearing before approving the hotel and mixed-use plan.  According to paperwork filed with the city, Citizens Bank has agreed to provide a loan of approximately $30 million to help finance the estimated $46 million project.

According to Greg Mitchell, Portland’s economic development director, the hotel project fits perfectly with the original vision for the property. “The addition of the hotel and future additional investment on this site really fulfils that longstanding vision for development in that area,” Mitchell said.

Development in that area is important to the city, Mitchell said, because it serves as a showcase of Portland to people traveling by ferries or cruise ships, entering the city through the Ocean Gateway terminal, Mitchell said.

Two other projects are also under development near Ocean Gateway Garage from one of the original developers of the site, Shipyard Brewing Co. co-founder Fred Forsley.  Forsley and Bateman Partners LLC are collaborating on an eight-unit luxury condominium building at 185 Fore St. and a five-floor office building at 16 Middle St. Both will be adjacent to the garage.