Nationally, existing-home sales rebounded strongly in September and were propelled by sales from first-time buyers, who represented 34% of the entire market – which is a level that has not been seen in more than four years..  All major regions of the country experienced increased sales last month.  These results reverse two consecutive months of lagging sales.

Total inventory at the end of September rose 1.5% to 2.04 million existing homes available for sale, but is still 6.8% lower than a year ago (2.19 million) and has now fallen year-over-year for 16 straight months. Unsold inventory is at a 4.5-month supply at the current sales pace, which is down from 4.6 months in August.

We are now three quarters into 2016, which at times is hard to believe.  Maine single-family home sales are up an impressive 11.4% while closer to home Cumberland County sales are up only 1.2% YTD. .

The graph below highlights many towns in the greater Portland area, comparing YTD 2016 vs 2015.  As you can see, several communities are reporting lower sales this year compared to the prior year.  It is important to keep in mind, however, that 2015 was a record for home sales in Maine, and nearly every community in the southern part of the state recorded annual double-digit growth. 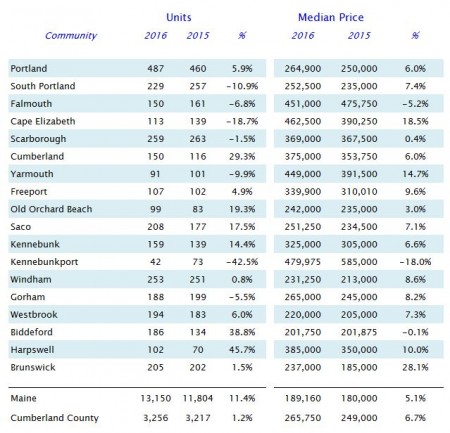 While overall Maine sales rebounded in September and were 5.1% ahead of the September 2015, and 8 of 9 months so far this year, Cumberland County has not been as strong recently.  September represented the fourth consecutive month of 2016 sales being below those of comparable months of 2015. Homes priced above $500,000 were down 24.2% in September.

Overall Maine sales rebounded in September and were 5.1% ahead of September 2015.  This has been the case in 8 of 9 months so far this year.  Cumberland County, however, has not been as strong recently.  September represented the fourth consecutive month of 2016 with sales being below those of comparable months of 2015. Homes priced above $500,000 were down 24.2% in September.

While YTD median selling prices for both the state and Cumberland County remain ahead of last year by healthy margins, both experienced a lower result in September compared to the month before.  The statewide price of $189,000 was the lowest since April and the county result of $267,000 was the lowest since May.  As we close out the year, these are important trends that we are tracking.