Single family home sales have been consistently below prior year each month in 2017, and July was no exception. For the month unit sales of 413 – 10.2% lower than July of 2016. Year-to-date sales are 12.0% below prior year. While the monthly median price of $295,000 reflected a small decrease from June, overall prices are up 8.8% over the prior year.

Condo sales are also up year-over-year. Unit sales are up 8.9% while median prices are up similarly at 7.8%.

The Existing-Home Sales report for July 2017 by NAR (National Association of Realtors) is scheduled for Thursday, August 24, 2017, and we will update our website at that time.

Home sales in June slipped in June as low supply kept homes selling at a near record pace but ultimately ended up muting overall activity.  Overall sales were decreased 1.8%t to a seasonally adjusted annual rate of 5.52 million in June from 5.62 million in May. Unlike Maine, national home sales are slightly ahead of last year (0.7%).

Total housing inventory at the end of June declined 0.5% to 1.96 million existing homes available for sale, and is now 7.1% lower than a year ago (2.11 million) and has fallen year-over-year for 25 consecutive months. Unsold inventory is at a 4.3-month supply at the current sales pace, which is down from 4.6 months a year ago. 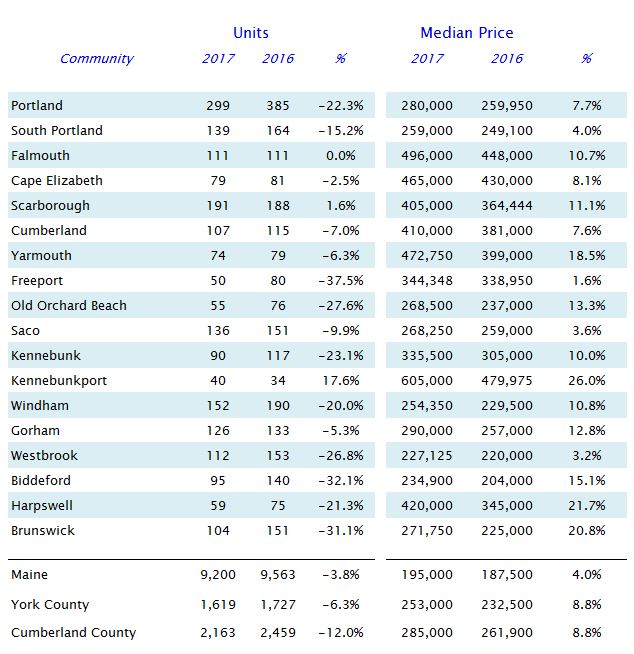